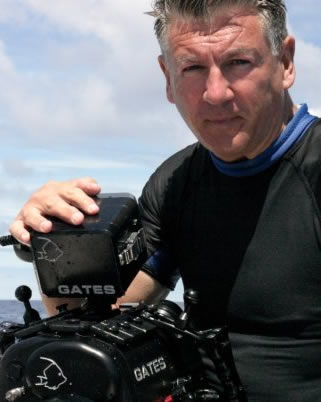 John is a former BBC Correspondent who has reported on stories around the world including Baghdad, Kosovo, Korea, Tahiti, and the dolphin meat trade in Japan. He’s reported live inside the London Aquarium shark tank on BBC1, the controversy of cage diving with great whites, while his special report on the legendary South Africa ‘sardine run’ was included in the BBC Six O’clock News Royal Television Society Awards presentation.

McIntyre’s extensive diving experience includes more than 1,000 dives in the Red Sea alone. He’s dived in Cocos, Indonesia, Australia, the Pacific Ocean, Indian Ocean, South Africa, Mediterranean, and of course around the UK. Among his commissions were ‘Caribbean Wreck Heaven’ and ‘Red Sea Wreck Heaven’, both of which he filmed, produced and presented.

His love of the underwater world was inspired by the classic film ‘Blue Water, White Death’ – a pioneering feature about the search for great white sharks by some of the world’s leading photographers.

A former science teacher, John turned to journalism in his 20s working on local newspapers in Hampshire. This was followed by a highly enjoyable career in local radio including as head of news at Southern Sound.

After about a decade at the BBC, John decided to pursue his childhood dream of becoming a professional underwater camera operator. The switch may have been dramatic but John travelled the world producing images for many broadcasters and even became the underwater cameraman for the legendary children’s television programme Blue Peter.

John says, ‘I’m delighted to be working with Mike Haigh on Wreck Hunters, which is unique and exciting for all involved. I hope to be able to use my journalistic, filming and communication skills to bring the project to the attention of a wider audience and hopefully inspire others to join.’