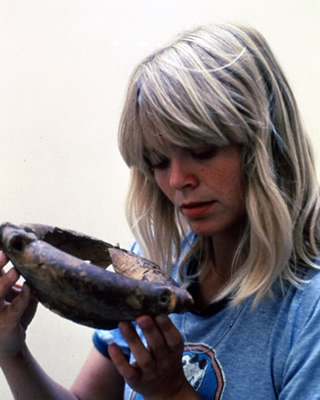 Joanna’s Diving Archaeology History
(Not All!)

Click on any of the above for further details.

Joanna has been a volunteer on countless underwater excavations over the years.  A graduate of St Anne’s College, Oxford, she worked on excavations under the auspices of Oxford University MARE, an organization that was set up to excavate and protect wrecks all around the world.

The highlights of these were the excavation of an Etruscan ship dating from the 5thcentury BC off the Tuscan island of Giglio, and a classical Greek shipwreck off the island of Panarea, in Sicily.  More recently, she has worked on wrecks of much more modern date – including the Graf Spee, a so-called German ‘pocket battleship’ from World War Two in Uruguay, and Lord Nelson’s ship, the Agamemnon, also in Uruguay.

Joanna says, ‘If you want to have marina archaeology as a career, you will have to put a lot of hard graft into it. It’s no mean feat to make a success for yourself in marine archaeology. You need people who are dedicated, passionate about the subject and always looking for that new angle of knowledge – and the rewards can be huge.’

Joanna owns a ski investment company, Erna Low Property, which specialises in selling apartments and chalets in the French Alp